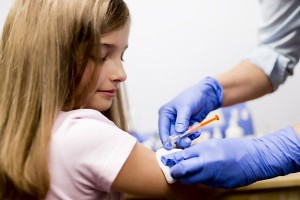 Imagine you and your newborn live in a town during a whooping cough outbreak, would you let just anyone hold your child? Kristen Bell, and a lot of other parents won’t and they have good reason to be concerned.

Bell is one Mom who’s all for vaccinations:

“When Lincoln was born (in March 2013), the whooping cough epidemic was growing, and before she was two months old, we simply said, ‘you have to get a whooping cough vaccination if you are going to hold our baby,’” she said.

Delta, her second daughter, arrived in December 2014 at the beginning of the largest measles outbreak in the U.S. in over a decade. Needless to say, the actress still strongly supports vaccines.

California is one of 20 states that allow “philosophical exemptions” from vaccines. Many families have taken the option, and the state has paid the price. In 2014, 11,000 Californians contracted whooping cough.

The measles outbreak this past winter affected 103 Californians and spread to 18 other states, affecting a total of 162 people. High vaccination rates are needed to keep disease down and protect those with compromised immune systems or those who are too young to receive vaccinations.

The Senate Education Committee of California, last week voted 7-2 for a bill that would require all public school-aged children to be vaccinated, only allowing medical exemptions.

Overall, California has a vaccination rate of 92.3 percent for kindergarteners; the national average is 94.7 percent, so it doesn’t take much for a virus to get a foothold. The state with the lowest vaccination rate is Colorado at 81.7 percent. You can check your state here.

As a Bostonian, my son is required to have the proper immunizations before attending school and the school system is militant about the paperwork. We received several notices before school began and regularly submit updates to ensure our child is staying on a vaccine plan. The only exemptions are medical in Massachusetts.

Just watching Swine flu rip through my son’s school during the 2009-2010 flu season is enough for me to keep his vaccines up. At the time, there was no flu vaccine for that influenza strain, and it was a nasty flu season, with triple the normal pediatric mortality rate.

Reading “horror stories” of vaccines gone awry did cause hesitation, but ultimately I knew the vaccines would save my son, more than harm him. Also, my pediatrician made it very clear I couldn’t continue to see her if I didn’t get him immunized. Something more and more physicians are demanding now from their patients.

What do you think? Are vaccines safe or potentially harmful? Does your school system or pediatrician require immunizations? We’d love to hear from you.