Crazy or genius? The meat-only diet 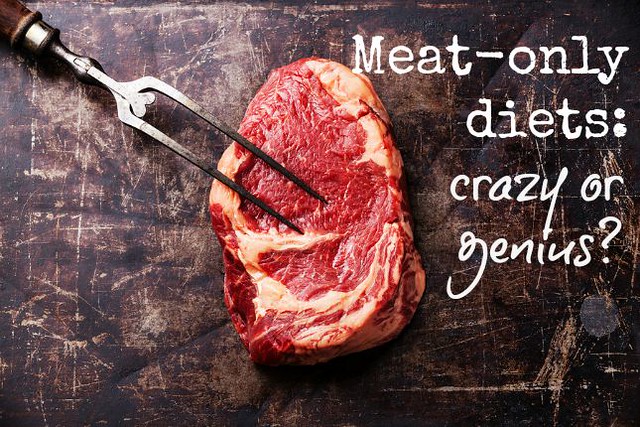 Crazy or genius? The meat-only diet

At a wedding reception I attended recently, I recoiled at the sight of my neighbor’s plate.

Piles and piles of juicy steak dripped over the sides of the sturdy paper plate, now straining against the weight of the burgeoning beef.

“Is that all you’re eating?” I asked, aghast. “Just a giant plate full of meat?”

His mouth full of half-masticated meat, he nodded. After a swallow, he explained that it was part of a new meat-heavy diet he was trying for health reasons.

Meat-only eating is a thing, guys.

The trend is part of a movement called “Zero Carb” living and although there are different subsets (some followers, for example, do eat vegetables or even, gasp, fruit), the basic principle is to avoid any and all carbs in your diet. It’s similar to the Atkins diet that was all the rage even a few years ago and it’s modern-day cousin, eating Paleo.

There’s this lady, who lost over 100 pounds eating only meat, only things “from the animal kingdom” and (thank goodness), black coffee and cream. Or this mom, who claims eating only meat helped her lose a dress size and gain a baby. Probably not in that order, but still. And then there’s the site that calls eating only meat the “Original Human Diet.”

The Andersen Family recently made headlines discussing their choice to eat a meat-only diet as a family, including their two young children. And although their original interview has since been removed from the Internet due to the backlash of sharing how they feed their family only “fatty, rib-eye steak…until we are stuffed. I mean literally. Thanksgiving full,” they are not the only people considering this lifestyle. So what are the pros and cons of choosing such an alternative diet?

“An all-meat diet would provide an individual with ample amounts of bioavailable protein,” admits Amy Klassman, registered dietitian at The Clare in Chicago. “Meat is more easily digestible and the vitamins are more readily available than within vegetable-based protein, like beans or legumes.”

She goes on to note that meat and animal-derived products, such as dairy or eggs are actually the only food sources of the B vitamins for humans, which is why vegans and vegetarians can often have a difficult time obtaining these vitamins, essential for muscle and neurological functioning. She also adds that meat is “very satiating” because of the protein content, which may keep you full for a longer period of time.

Father James, a 42-year-old engineer-turned-priest from Michigan, recently switched to a meat-heavy diet of “leaner, red meats about 12 times per week,” for health reasons. After his annual check-up with his physician he was told he hypothyroidism and would also need medication for gastroesophageal symptoms and a minor surgery for dysphagia (trouble swallowing food).

“I began thinking, ‘There’s gotta be another way to be healthy then taking medications and minor surgical procedures,'” he relates.

He decided to look for a solution by changing up his diet and turned to the Blood Type Diet, which based on his particular blood type, meant following a high-protein diet. After a lighter breakfast of oatmeal, his lunch and dinner both include lean, red meats such as steak or ground sirloin. In the first three months of starting his meat-heavy diet. the priest states that his cholesterol dropped 20 points, he lost six pounds with no exercise, he gained more energy and was able to eliminate the medication.

“I recently had my annual physical last month and my doctor said it’s the best he has seen me, health-wise, in a long time,” he notes.

“Coming from an engineering background, when you put the wrong oil in the engine, the car doesn’t run right,” he adds of his decision to change up his diet. ” Similarly, if we put the right food in our bodies, everything seems to work better. The diet just makes sense.”

And while James may have had success in impacting his health through his diet, registered dietitian and owner of Nutrition in Sight Monique M. Richard points out that it’s important to remember that diet and health are highly individualized.

“If one person has had success manipulating his or her lipid profile, it may be a unique situation, or entirely unrelated to the current dietary choices of eating more meat, since we make about 80% of our cholesterol endogenously with diet and other factors affecting the rest,” she explains. “It is not always a cause and effect relationship although nutrition can certainly affects the cascade of benefits or problems.”

High-protein diets can be helpful in situations where protein is being depleted faster than it is being consumed, such as is the case for extreme athletes, burn victims or specific cancer patients, says Richard, but not for an average healthy individual.

She also adds that there are significant drawbacks and dangers to a meat-only diet, such as strain on the kidneys from excess ammonia and urea production from the breakdown of excess protein (more than your body needs or can store).

“Most Americans are already consuming 3x more than needed a day,” Richard explains. “In addition, the saturated fat, sodium, antibiotics, hormones and carcinogens related to meat preparation can be dangerous for children, adults and anyone with multiple health conditions. The lack of antioxidants, micronutrients (vitamins and minerals), fiber, carbohydrates and phytochemicals can contribute to inflammation and nutrient deficiencies and the possibility of food-borne illness is also increased by the consumption of meat only.”

“Overall, I’d recommend not following an all-meat diet,” says Klassman. “I believe this is just a trend that seems to be riding the coattails of other minimal carbohydrate diets such as the Atkins or Paleo diets. It may become popular for a short time, but as it is not a long-term sustainable diet, it will not have a heavy following for long. This diet can be detrimental to your health in the long-run. It’s best include protein in every meal, but to cover at least half of your plate with fruits and vegetables. Moderation is key within eating — too much of anything is bad for you.”

Both experts are in agreement that extreme diets such as meat-only eating are not best to promote for all individuals.

“What may work for one individual may not work for others, and their may be a physiological reason to follow a specific plan for one person and not the other. The replicated research on the benefits of plant-based diets and incorporation of a variety of foods can not be disputed. Time has consistently shown a proper balance of macronutrients (fat, carbohydrate and protein) are beneficial for optimum nutritional status.”

TapGenes Takeaway: Moderation is key when it comes to eating meat in a healthy diet.