Are You Ready for Marraige? | TapGenes

Four signs that you might not be ready for marriage 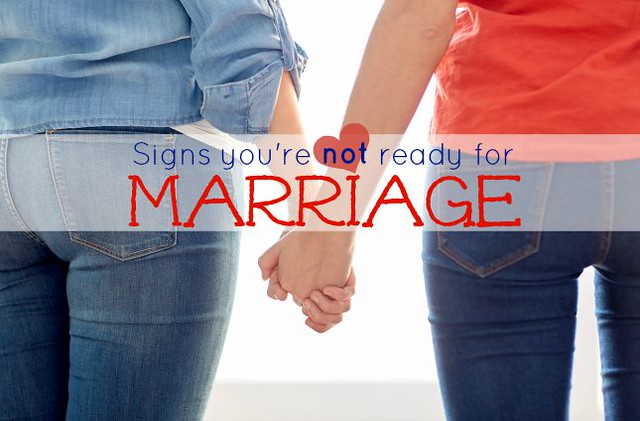 Four signs that you might not be ready for marriage.

When I was twelve years old, I thought I had it all figured out. I can remember telling my mom with such confidence that I was going to get married at 20 and have my first baby at 22 years old. She would giggle ever so slightly and then take on a stern, authoritative look as she lowered her voice and said, “That’s too young, you’ll see. Besides, there’s no way you can know now when you’ll be ready for marriage and children. You’ll see.”

Naturally, I thought she was crazy. But when the big 2-0 hit, marriage was the furthest thing from my mind. I hadn’t even finished college yet, nor had I met my “Mr. Right.” Believe it or not, I never found him at any of the numerous frat parties or seedy bars I frequented nearly every night during my first two-thirds of college. My mom must have known me better than I thought.

The truth is, even if I wasn’t actively searching for Mr. Right during my teens and early twenties, I was certainly dreaming of him. Idealizing him. Yes, I was going to college to prepare for a career, but in the back of my mind, marriage and a family was my ultimate goal. That’s what I wanted more than anything even though I hadn’t yet put one ounce of thought into what marriage and parenthood really meant.

Let me back up for just a second to say that this article isn’t meant to imply that age dictates when someone should or shouldn’t get married. It’s about maturity and understanding – two things I didn’t have until much later in life. In fact, not until after I actually got married. If you’re like I was, you’re probably not even reading this article, but if you happened to stumble on to it by mistake, please read on. If you’re one of those savvy young women who’s considering marriage, but having some doubts, no matter how tiny, read on. If you can relate to any of the items below, you might not be ready for marriage.

1. You’re more in love with the idea of marriage than your significant other

I met the man I wanted to marry at 23, but painstakingly had to wait six more years until our wedding. Why? He didn’t want to rush into it. He thought it would be smart to build our relationship more before taking the leap. He would often say, “I believe that marriage is forever. I don’t ever want to get a divorce, so we need to be 100% sure before we get married.” I didn’t get it. I thought he was scared of commitment or just being selfish. Turns out, he was just being responsible. The mere fact that I didn’t get it just goes to show that at the time, getting married was more important to me than building a strong relationship with the man I loved.

2. You feel the need to hurry up and get married

In retrospect, I now see that I rushed my ex into marriage. No, I rushed us into marriage. Neither of us was ready. But my desire to live out the fantasy I had held on to for so many years took over the rational part of my brain. If anyone had tried to get me to slow down or think about it some more, I honestly don’t remember. I was on a mission and nothing could stop me. Regardless of what’s making you feel like time is running out, whether it’s your age, pressure from parents or the fact that all your friends are getting married, if you’re both not in agreement that the time is right, it probably isn’t.

3. You’re already shopping for dresses before he’s popped the question

Guilty! It’s pretty common for girls to start fantasizing about their wedding day before they’ve hit puberty. At least that was the case for my generation. Soon after I snagged the guy I wanted to marry, I already started planning our wedding. Now, there’s nothing wrong with dreaming about your wedding, but there’s a big difference between dreaming and obsessing. If you’re subscribing to Brides magazine, regularly visiting TheKnot.com for any reason other than checking out a friend’s or family member’s wedding profile or if trying on wedding dresses before he’s put a ring on your finger, you’re probably not in touch with reality. Slow it down!

Marriage is all about sharing and compromise. Here, you have two people from totally different families with their own sets of traditions and values. Once you’re married, you have to navigate all of those differences and it takes a lot of patience, understanding and sacrifice. Holidays might not be celebrated the same way you’re used to. You might disagree over religion. You might have completely different relationships with your parents. If you’ve lived on your own for a period of time and absolutely loved it, be aware that once you’re married or living together, you won’t always get to watch whatever you want on TV. You might not get to sleep on your favorite side of the bed. It might sound silly, but I hadn’t given any of these things any thought before moving in with my ex. If you’re happy with your way of life and you’re dead set on keeping it the way it is, you might be setting yourself up for disaster.

In spite of the fact that I’m now divorced, I still have no regrets. I’m not going to say “I wish I knew this or that before I got married” because I honestly don’t think I had the ability to even stop and think or solicit advice before taking the plunge. I had already made my decision. Plus, it was one of the best experiences of my life. It may not have turned out the way I had imagined, but it was more real than any idealized notion I had had before.

You’ll never hear me say that my marriage was a mistake. To me, it was a necessary and often beautiful experience that without which, I wouldn’t be the woman and mom I am today.