10 things you need to know about childhood concussions | TapGenes

10 things you need to know about childhood concussions 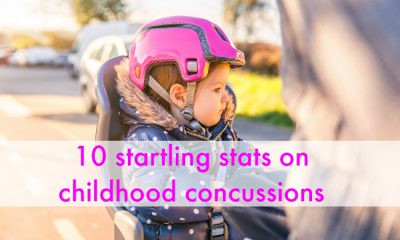 10 things you need to know about childhood concussions

“Concussion” has become a buzz word in recent years as our knowledge of brain injury has evolved and major sports organizations have come under scrutiny. But what might surprise you is that concussions may impact children even more than professional athletes.

“The developing brain is more vulnerable to concussions than the adult brain,” says Dr. Harry Kerasidis, MD, a neurologist who wrote the book on concussions. “The brain continues developing through the age of 25, so brain injuries can hinder development, while increasing the onset of Alzheimer’s and dementia.”

And, alarmingly, Dr. Kerasidis points out that concussions may not only affect cognitive development, they can have long term impact on emotional development, as well.

Concerned yet? Check out these 10 crucial things you need to know about childhood concussions.

1. A concussion is a mild traumatic brain injury. This can result from a direct blow or indirect blow to the head, which causes acceleration, deceleration and rotational forces on the brain inside the skull. These physical forces can trigger subtle changes in brain chemistry, blood flow and metabolism, which put the brain into a recovery phase.

During this recuperation period the brain is healing and any added cognitive demands (activities like learning new things, reading, working on a computer or watching TV) can slow its mending process. Similar to how an injured knee needs to be wrapped, elevated, iced and “babied” in order to promote quick and proper recovery, an injured brain needs to be rested.

2. There is not one specific sign used to diagnose a concussion. This may be  one reason why a lack of concussion awareness exists among parents and coaches. Signs and symptoms can vary from one child to another. Ever seen someone shine a light into a sidelined athlete’s eyes? Well, even that test cannot positively diagnose a concussion.

Says Dr. Barry Jordan, MD, MPH, a board-certified neurologist and team physician for U.S.A. Boxing, “The best way to assess for a concussion in the conscious athlete is to assess cognitive function, which would include orientation, memory and assessing for confusion and amnesia. One definitive sign is disorientation.”

3. These are the most common causes of concussions in children. According to a study published in the journal Pediatrics, when examining a four-year span of emergency department visits for concussions in children ages 8- to 19-years old, about half of these visits were for sports-related concussions. Among non-sports related concussions, falls are the most common cause, says Dr. Fred Klingbeil, MD, a board-certified pediatric physiatrist and medical director of an Iowa hospital that recently introduced a specialized concussion clinic. The AMSSM position statement reveals that, unfortunately, “as many as 3.8 million concussions occur in the USA per year during competitive sports and recreational activities, and up to 50% of the concussions go unreported.”

4. The symptoms of concussion can be puzzling. A concussion can occur with or without loss of consciousness, emphasizes Dr. Jordan. Headache is the most frequently reported symptom, according to an article in the Journal of Pediatric Surgery, but fatigue is the most severe symptom in children who end up being hospitalized for concussive injury.  Other concussion symptoms range from reduction in concentration, decreased short-term memory and amnesia surrounding the concussive event itself, to blurry vision, light/noise sensitivity and sleep disruption (which can tie directly  to cognitive, behavioral and mood changes).

5. Reinjury within the crucial recovery time window can have worse outcomes. The largest threat to a child who has suffered a concussion is a second head injury before the brain is fully recovered.

“If a youth suffers another concussion while still recovering from a previous one, it could create a very serious, life-threatening situation known as second impact syndrome,” says Dr. Klingbeil.   The American Journal of Sports Medicine explains the danger of this so-called “second-impact syndrome” in its study examining catastrophic head injuries in adolescent football players, warning that second-impact syndrome can cause cerebral vascular congestion, which can lead to brain swelling and sudden death.

6. Recovery time can vary from person to person. Studies show that recovery time is hard to predict based on the type or mode of head injury, and it can range anywhere from one week to several months. However, according to the American Academy of Pediatrics (AAP), the majority of children who experience a concussion are free of symptoms within seven to 10 days.

Because the changes that occur in the brain during concussion can be so subtle, and can be confused with the behavior and personality changes that occur normally as children age, it may be beneficial for children engaged in sports to get baseline testing.

“Get pre-season testing done to help with any potential return-to-learn or return-to play-decisions that may need to be made during the season in case of injury,” says Dr. Klingbeil. “This can take the guess work out of the decision of whether the youth has recovered from their concussion. When in doubt, sit it out.”

7. These sports are the most dangerous. Concussions occur in all sports, with the highest incidence in football, hockey, rugby, soccer and basketball, according to the AMSSM position statement.  A study examining sports-related concussions in the journal Pediatrics found that football has the highest incidence of concussion and that girls have higher concussion rates than boys in similar sports. The most concussion-prone sports for girls were soccer and basketball. However, parents shouldn’t be discouraged from enrolling their kids in sports where concussion is a risk, says Dr. Jordan, because the benefits of sports participation outweigh the risks.

8. The adolescent male age group is the most affected by concussion. According to the CDC, males ages 10 to 19 have the highest concussion rates.

“At this age, youth are more involved in sporting and recreational activities, but may not have developed adequate strength and coordination,” says Dr. Klingbeil.  “Kids are getting larger and the forces in sports are greater. Teen males tend to take more risks and be less aware of safety.”

The harder the hit, the worse the recovery. According to a new study published by the AAPA in March 2015, the severity of the concussion is directly related to the severity of school performance and academic issues.

9. Head gear may help prevent some, but not all, concussions. According to the AMSSM’s position statement: “helmets, both hard (football, lacrosse and hockey) and soft (soccer, rugby) are best suited to prevent impact injuries (fracture, bleeding, laceration) but have not been shown to reduce the incidence and severity of concussions.”

However, while they may not prevent concussion in the above-mentioned field sports, helmets have been shown to reduce the incidence of concussion incidence in skiing and snowboarding.

10. Our knowledge of pediatric concussion is changing.  What earlier generations dismissed as “getting the bell rung,” we now understand as a far more concerning event.

“Under no circumstances should pediatric or adolescent athletes with concussion return to play the same day of their concussion,” states the American Academy of Pediatrics. Concussion awareness among responsible adults is key. When signing a child up for sports, Dr. Jordan recommends that parents seek a coach who has gone through official concussion training.

Watch out for new concussion remedies coming around the bend. A clinical trial that will be completed in July 2015 is examining whether progesterone, a naturally occurring hormone, could have a positive effect on the treatment of concussions.

Says Dr. Michael Platt, MD, a large proponent this hormonal therapy,  “I am of the opinion that progesterone cream should be in the first aid kit of all schools that participate in any sports where head injuries might occur.”

Says Dr. Kerasidis, the jury is still out on this therapy: “Preliminary evidence shows that when progesterone is administered before a game or within 15 minutes after an injury, the severity of the symptoms may be reduced, but more research is needed to learn about this before using this treatment.”

TapGenes Take Away: Concussions in kids should not be dismissed as something that’s bound to happen during sports and play. Here are the startling statistics and the newest research.

Should your child play football?

Protect your child from injury